BISHOP AUBREY SHINES: DONALD TRUMP IS THE CANDIDATE BLACK VOTERS HAVE BEEN WAITING FOR

Evangelical Bishop Aubrey Shines, an outspoken supporter of Donald Trump, says the Republican presidential nominee is ready to lead black and Latino voters away from the Democratic party of slavery, welfare, and abortion.

“Don’t just look for 10 percent of black Americans to vote for Donald Trump,” Shines told Breitbart News in a recent interview. “As long as Trump can bring his message of change straight to the people, I think you’re going to see more black people voting for Trump than have voted for a Republican presidential nominee in decades.”

For years, at Tampa’s Glory to Glory Church, Bishop Shines has brought his brand of God’s gospel to millions of people. His strident political advocacy for Trump, he says, is rooted in the proud history of the Republican party and starts with educating voters on the hidden history of the Democratic party.

“I ask people to ask themselves a question: are you better off after having supported the Democratic party that has given you slavery?” Shines says. “Are you comfortable, blacks and Latinos particularly, in knowing that you have been part of a political party that has a legacy of lynching, the KKK, Jim Crow laws? Or are you just not aware of these facts?”

One of the few black faith leaders publicly supporting Trump, Bishop Shines said his support for the White House hopeful “was never a question.”

“Once Trump became the Republican nominee, I was going to vote for the party’s candidate,” he said.

“I’m not blind to some of the personal challenges and some of the positions that Trump has held in the past, that were not in keeping with conservatism,” Shines said. “However, the moment that Trump explained his position on Supreme Court justices and federal judges and said here’s where I stand on school choice, etc., I don’t know why it’s taken any elected Republican as long as it has to endorse his candidacy.”

Trump faced a barrage of criticism last week over lewd remarks he made about women in a caught-on-tape conversation in 2005 with former Access Hollywood anchor Billy Bush.

Trump apologized for his comments, but not before a bevy of establishment Republicans withdrew their support of his candidacy and demanded he leave the presidential race.

“Shame on them. I look at some of the congressmen and senators and governors who have pulled their support of Trump following the fallout from his hot mic remarks, and I think their abandonment is deplorable and despicable,” Shines said.

“They may not like Trump’s politically incorrect tone,” he continued, “but the reality is we’re not voting for a man, we’re voting for a platform. When I look at the Republicans who’ve abandoned Trump, I think to myself, ‘who’s your second choice?’ And if they really adhere to the Christian values of forgiveness — and Trump has apologized and has said ‘I was wrong‘ — then why not forgive, instead of showing so much disdain for him?”

Shines says the Republicans who’ve betrayed Trump for his transgressions rarely exhibit the same level of anger after they fail to stop legislation “that wreaks havoc on America.”

“Where is this moral outrage when they’re passing bills that take our tax dollars to fund abortion and Planned Parenthood, and other legislation that wreaks havoc on America?” Shines asked. “Where was this same outrage when they failed their constituents after Obamacare passed? Sure, Obamacare is falling apart. But they could’ve saved the American people from this pain by defunding it. The House of Representatives has the power of the purse. They could’ve starved Obamacare. But they didn’t want to look bad.”

Shines continued: “A group of clergy spoke about how repulsed they were at the comments Trump had made in 2005. I said, have we forgotten that the very business that we’re in is to forgive and redeem those who, according to Hillary Clinton, are not redeemable? Trump, again, has asked for forgiveness. Who are we to deny him now?

“So I think it’s silly. I think it’s childish,” Shines said. “I think it’s very petulant, that so many of our leaders are not standing up with Donald Trump to make sure that we have a Republican president sitting in the Oval Office who will be able to governor as a conservative.”

After entering the presidential race last June, Trump, beating out 16 other contenders, clenched the Republican party’s presidential nomination in July.

Shines says Trump can credit much of his meteoric rise to the top of the Republican presidential ticket to his unabashed willingness to call illegal immigration a gambit that betrays American workers — and in doing so, he’s embarrassed both the Republican establishment and the so-called civil rights community.

“Illegal immigration matters a lot if you consider poverty among many black and Latino Americans,” Shines said. “Illegal immigration, and even President Obama has admitted this in the past, has caused increased unemployment in the black community.”

Shines points to people like Peter Kirsanow, an official with the U.S. Civil Rights Commission, who’s long-argued that illegal immigration has severely depressed the labor force participation rate of low-skilled black Americans, only to be routinely ignored by President Obama and the Congressional Black Caucus.

“Granting work authorization to millions of illegal immigrants will devastate the black community, which is already struggling in the wake of the recession that began in 2007 and the subsequent years of malaise,” Kirsanow wrote to Obama and the Congressional Black Caucus in 2014. “Illegal immigration has a disparate impact on African-American men, because these men are disproportionately represented in the low-skilled labor force.”

Shines contends that the president’s past statements expose his current hypocrisy on illegal immigration.

“Obama himself talked about the straining of the social safety net and the added burden illegal immigration places on the welfare system,” Shines said, referencing Obama’s autobiography, The Audacity of Hope: Thoughts on Reclaiming the American Dream, where he lays out a strong case that illegal immigration suppresses wages.

“There’s no denying that many blacks share the same anxieties as many whites about the wave of illegal immigration flooding our Southern border—a sense that what’s happening now is fundamentally different from what has gone on before,” then-Senator Obama wrote in his 2006 autobiography.

“The number of immigrants added to the labor force every year is of a magnitude not seen in this country for over a century,” Obama wrote. “If this huge influx of mostly low-skill workers provides some benefits to the economy as a whole—especially by keeping our workforce young, in contrast to an increasingly geriatric Europe and Japan—it also threatens to depress further the wages of blue-collar Americans and put strains on an already overburdened safety net.”

Shines says, “under Obama, black unemployment has skyrocketed. Household median income, the wage gap” are all going in the wrong direction.

However, Shines’ indictment of the Democratic party’s failed social policies dates back decades.

“The trillions of dollars in payments from various poverty programs that have trickled down to black people since the ’60s, what has it gotten them?” Shines asks. “What do they have to show for it?”

“Thanks to Democrats, black people, by and large, don’t have school choice. But the majority of Congressional Black Caucus members send their children to private schools,” Shines continued. “Hillary Clinton sent her child to private school.”

“Again, Democrats don’t want black parents to send their children to the school of their choosing,” Shines said. “That shouldn’t be Hillary Clinton’s decision to make.”

“There’s great irony in these Democratic party positions,” he said. “The same big government liberals who want to put a man in the bathroom stall standing next to our young daughters also wants to mandate where our children are educated.”

“The Democratic Party is fractured, it’s broken. The Republican party has the answers.”

Bishop Shines believes Trump’s candidacy has the potential to make history for the Republican party.

“I know pastors that have never, ever voted for a Republican, who will be voting for Donald Trump.” Shines said. “Why? They feel betrayed by Barack Obama. The president’s push for same-sex marriage. These life-long Democratic voters have buyers remorse. These people are not homophobic, they just want traditional marriage. Black pastors were livid over Obama’s support for same-sex marriage. And they now see the deluge of destruction a moral decay that’s persisted for decades as a result of Democrat policies.

Shines said faith leaders “realize that the truth has been hidden from them, that the establishment media — CNN, NBC, ABC, CBS — they’re not going to report the truth.”

Before our conversation ended, Bishop Shines made one more declaration. 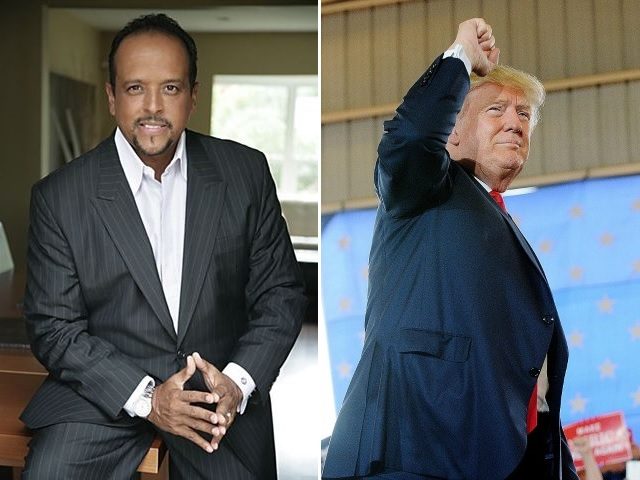 “If just 15 percent of black people gave the Republican party their vote, the Democratic party would be history,” he said.

“They could not survive that, ever.”