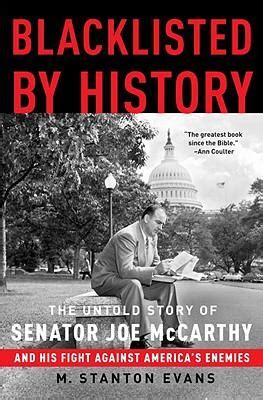 What if I told you that what you think you know about Senator Joe McCarthy and his investigations into Communists working in the United States government was wrong?

The conventional image of the Senator from Wisconsin is of a bully, a liar, and a demagogue but that is the media narrative which has yet to be corrected after over 60 years of gaslighting. The author presents a well-researched narrative detailing McCarthy’s rise to prominence through his censure and beyond. Using original documents obtained from the Senate and FBI archives; personal papers of those who “starred” in the drama; and digging through both de-classified documents from the United States and the former Soviet Union, M. Stanton Evans takes great pains to lay out what was a 1950s version of the Deep-State Cabal.

The parallels to today are stunning and show that the United States government hasn’t changed much from the 1940s. Many people today confuse what Senator McCarthy investigated with the House Un-American Affairs Committee (HUAC) and rarely use primary sources to tell the story. What the author found was that people who reference McCarthy in their narrative cite other authors creating a circular narrative where one wrong person cites another instead of investigating themselves.

Thomas Jefferson told us to “Question with boldness even the existence of a God; because, if there be one, he must more approve of the homage of reason, than that of blind-folded fear.” So, years ago, I began a deep-dive into Senator McCarthy – what I found was disturbing until I came across Blacklisted by History which put to rest many of my underlying reservations about the “consensus” that McCarthy was public enemy number one.