‘It Was An Invasion’: How Hungary Managed To Erase Illegal Immigration In Just A Few Months


BUDAPEST, Hungary — When other countries welcomed refugees with open arms, Hungary decided it was time to eradicate illegal immigration at any cost. 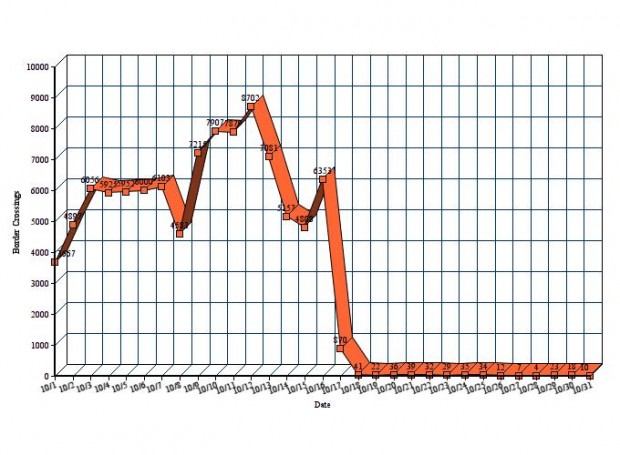 The country succeeded, but that success damaged relations with the European Union in the process.

Hungary’s second border fence has just been completed in the southern town of Asotthalom. The 96-mile long, 14 ft. tall double-line of defense doesn’t look too intimidating from a distance. Go a little closer and you’ll notice several layers of razor-wire capable of delivering electric shocks, cameras, heat sensors and loud speakers ready to tell migrants they’re about to break Hungarian law if they as much as touch the fence.

Close to every police officer in the country is part of a rotation to make sure the grounds are covered at all times. Temporary military bases have been set up by the border to house them while they do their rotation.

More than 1,000 volunteers will receive generous salary and benefit packages when they deploy as “border hunters” after extensive training. The area surrounding the fence is closed off for the public. Visitors need to apply for access in advance and photos of guards and the Serbian side are strictly prohibited for security purposes.

If a migrant is lucky enough to make it across, local guards patrol the surrounding area around the clock. The ones who are caught are arrested and dropped off on the Serbian side. They don’t even get a chance to apply for asylum unless they do so at a “transit zone” where they are held in housing containers while their cases get processed.

Prime Minister Viktor Orban wants to make it impossible for uninvited guests to make it across the border, no matter the numbers they arrive in, and it appears as though he has succeeded.

“They don’t even try,” a local border guard tells The Daily Caller News Foundation. “We haven’t had a Syrian in six months.”

Rewind back to September 2015 and there’s a completely different picture. Thousands of migrants streamed across the border every day as they made their way north to Austria, Germany and Scandinavia.

“It was an invasion,” Laszlo Toroczkai, the mayor of Asotthalom, told TheDCNF. “Illegal immigration is a crime in a normal country. It’s not a normal thing to break into a country.”

Toroczkai decided to start a war on illegal immigration. He wanted a fence, and the government agreed.

“The real public mood was: hang on this is not good, you should do something,” Zoltan Kovacs, a spokesman for the Hungarian government, told TheDCNF. “You should at least have the ability to handle what’s going on.”

While Hungary is far from the final destination for most migrants, its location along the so-called “Balkan route” made it a natural pit stop for hundreds of thousands of people pursuing a life in western Europe.

The Orban administration looked at a number of measures before deciding on the fence.

The results were staggering. The influx went down from 6,353 one day to 870 the next.  Illegal border crossings were steadily below 40 per day throughout the rest of the month.

Kovacs describes the fence as “an act of solidarity” toward the rest of the EU. By stopping migrants from entering the country, Hungary argues it keeps immigrants out of the entire 28-nation bloc. The government expected other countries to offer assistance, but the help never came.

“Instead we’ve received only political barrage and charges that we are inhumane and stuff like that,” Kovacs said.

The measures have cost around 700 million euros ($763 million), according to Kovacs’ rough estimates. He believes the bill would have been “a lot more” if the country didn’t take action, as the costs of hosting and deporting migrants quickly add up.

The real price it had to pay was, instead, of a diplomatic nature.

Just before the fence went up in 2015, EU voted in favor of imposing migrant quotas for each member. The idea was to ease the pressure on the frontline states — particularly Greece and Italy. Hungary was slated to host 1,294 migrants as part of deal, but the government refused. It instead joined Slovakia to take legal action against the EU.

“We would like to retain the elements of sovereignty, which are there by law, and we are against a stealth way of taking away elements of your sovereignty,” Kovacs said.

Hungary argues the “four freedoms” of the EU project — the free movement of goods, capital, services and people — can only be ensured if the outer borders are protected.

“You can not defend the achievements of Schengen from within. It has be done at the borders,” Kovacs said.

While the international reaction to Orban’s immigration policies has been anything but good, the people of Hungary have shown great support.

Orban announced a referendum on the quotas in February 2016, saying he would openly campaign for a “no” vote. The referendum had no legal implications for the EU, but a successful result for the Orban administration would still send a strong message to liberal allies.

Hungarians almost unanimously backed Orban, with 98.4 percent voting no. The voter turnout of just above 44 percent made the results invalid, but the crushing support for Orban’s agenda solidified Hungary’s image as a rebel within the EU.

“It’s common sense,” Kovacs said of the results. “Many say that what we have [in Hungary] is something like xenophobia, but it’s certainly not true.”

While the government was unable to use the results for legislative action, it continued to impose immigration measures.

The Hungarian parliament passed legislation in March to put all asylum seekers in container housing along the border, to await legal processing. The move caused outcry among international aid organizations, with Amnesty International calling it a “flagrant violation of international law.”

“Rounding up all men, women and children seeking asylum and detaining them months on end in container camps is a new low in Hungary’s race to the bottom on asylum seekers and refugees,” Gauri van Gulik, Amnesty’s deputy director for Europe, said in a statement.

The government, on the other hand, calls the detention label “misleading” since the asylum seekers have the option to leave and return to their home countries at any point.

“It’s misleading, it’s not detention, most definitely not in respect to the penalty element of it,” Kovacs said.

A number of countries are allegedly prepared to issue an ultimatum for Hungary and Poland this fall to either accept more refugees or leave the union.

The feud with the EU has escalated in other areas as well. EU has threatened to file a lawsuit against the country after it moved to regulate foreign-funded universities — particularly one established by Hungarian billionaire George Soros.

Despite the tense situation, the Orban administration remains positive toward the European project’s original purpose.

“We believe that the destination that the founding fathers have given to the European Union at that time was good,” Kovacs said. “Now, when you bump into problems and a crisis, you should go back to the founding fathers. That’s what the U.S. usually does and it works.”