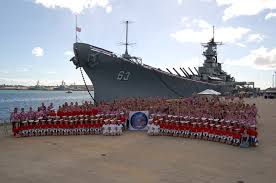 The surprise attack on Pearl Harbor by the Imperial Forces of Japan, executed by Admiral Isoroku Yamamoto’s strike plan “Z”, commenced at 7:48 AM Hawaiian Time 75-years ago today.  The base was attacked by 353 Imperial Japanese fighters, bomber, and torpedo planes in two waves, launched from six Japanese aircraft carriers.

All eight U.S. Navy battleships were damaged, with four sunk. All but the USS Arizona (BB-39) were later raised and six were returned to service and went on to fight the Imperial Forces of Japan in the WWII. The Japanese also sank or damaged three cruisers, three destroyers, an anti-aircraft training ship, and one mine layer.  In addition 188 U.S. aircraft were destroyed; 2,403 Americans were killed and 1,178 others were wounded.  However, important base installations such as the power station, shipyard, maintenance, and fuel and torpedo storage facilities, as well as the submarine piers and headquarters building (also home of the intelligence section) luckily were not attacked.  And most importantly our carrier fleet was out at sea, unbeknownst to Yamamoto’s strike force until their prestrike reconnaissance mission, just before the commencement of the attack.

Japanese Prime Minister Shinzo Abe announced he would travel to Pearl Harbor today to recognize the 75th Anniversary of Japan’s attack on the home port of the U.S. Navy’s Pacific Fleet.   Prime Minister Abe is the first Japanese leader to visit Pearl Harbor to "pay tribute [and] comfort the souls" of those who died from both countries during World War II.  Admiral Isoroku Yamamoto said that Japan’s attack on Pearl Harbor “awoke a sleeping giant”.  The attack was labeled “A Day of Infamy” by President Franklin Delano Roosevelt.  In the next 3 years, 7 months, and 25 days, the U.S. Armed Forces and our Allies in the Pacific Theatre, defeated the Imperial Forces of Japan.  On September 2, 1945, General Douglas MacArthur, USA, representing the Combined Allied Forces, accepted the “Unconditional Surrender” of the Imperial Forces of Japan aboard the USS Missouri (BB-63) in Tokyo Bay.

Today we honor the brave men and women assigned to and stationed on Hawaii  that day who died and for those who survived for their bravery, gallantry, fortitude and perseverance to fight on.  Their efforts and abilities are a shining example for all Americans to embrace and exemplify.

Please take a minute today to honor their cause, their purpose, their dignity and their sacrifice.